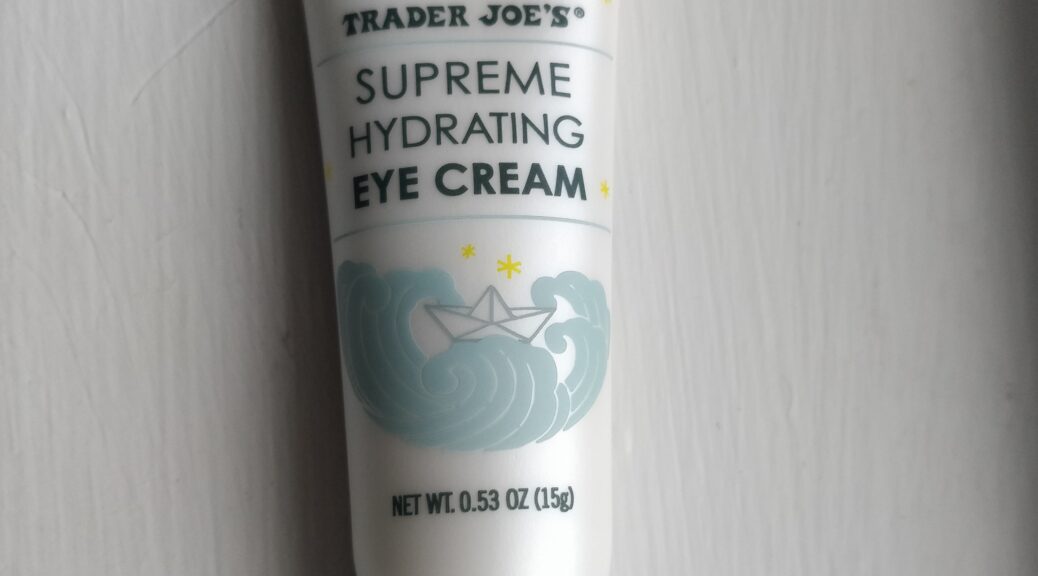 It’s a phrase that has ended up on t-shirts, coffee mugs, sweatshirts, and so on:

“The bags under my eyes are designer.”

And it’s what I think of each time I apply Trader Joe’s Supreme Hydrating Eye Cream.

Now before you roll your eyes, hear me out.

The Supreme Hydrating Eye Cream is just as its name implies.. strictly a hydrating cream. This means if you have dark undereye circles, it’s doing nothing special for that issue except for moisturizing that very sensitive skin. Hence, why I think of that quote. (You can roll your eyes now.)

It also doesn’t contain some of the ingredients of some of the higher-end eye creams, but it does have plant extracts, collagen, and COQ10.

The packaging recommends using the eye cream day and night for best results and applying using a gentle tapping motion.

Personally, I found using the cream only at night works best for me. When I tried to apply the cream in the mornings, I found that it caused my eye make-up to smear and, at times, could leave behind an almost greasy residue on my skin. That said, if you’re someone that deals with a lot of undereye dryness, twice a day might work better for you. (This is usually not an issue for me.)

The eye cream itself is white in color and does have a slight scent. It wasn’t enough to bother me, but I will say it’s probably a little stronger than the Lacura Face Care night cream sold at Aldi if you’re familiar with that.

Would I buy it again? Probably not, but maybe during the winter months?

There’s nothing wrong with this eye cream, I just don’t feel it meets my personal skin needs at this point in my life. I don’t usually deal with any dryness around my eyes, so I’m not sure this is a product that I absolutely need. I would rather have something to address undereye darkness. That said, if you do deal with flaky skin around your eyes, this could be a great product for you!